The weather was  exceptionally beautiful this past weekend and I spent in the garden (insert beaming smile). With Melissa’s help, we finished the last of the raised beds, planted some bulbs and planted the two large pots on either end of the house.

Melissa decided to splurge and purchased a water feature we both had our eye on for a while. I foresee a day when  I will have to battle her for it!

Eventually I will put down some mulch around the bed, but I still have plenty of weeding to do. If you think you see a raised bed inside a raised be, it’s not too far from the truth. When the owners of this house renovated they filled the circular drive and since it was on a slope they used recycled timber from the house to create two levels. The outcome created two oddly shaped pseudo raised beds and they filled them with wood chips, grass trimmings and sandy soil. When you walk on it, it’s rather spongy!

In the background, in the lower level there is room for another raised bed, but this is where I hope to place a small hobby greenhouse in a few months. It will be 6′ x 8′ and fit just perfectly in the space. To the back of the greenhouse  is the composting area and then in front will be room for some potted plants and the existing lilies.

We will need to purchase more decorative stones to place around the base so to hide the plastic frame. This bed is planned for herbs, but I did plant some caladium bulbs behind and to the left and right sides of the water feature. When they grow they should present a nice view of the water feature nestled in the pink, green and white foliage of the caladiums as well as with the fullness of the green herbs to the front.

A couple of months ago we purchased two rather large planters from the Bullucks sale, which happens in Rocky Mount every year and is a huge event, by the way. Since the weather has finally broke from its hot, cold, cold, hot cycle (fingers crossed) we decided to go ahead and plant them.

This planter is a rough terracotta design, with a slightly burnt appearance. I planted golden Pothos with the hope it will become full and cascade down the sides. In the middle I placed an ornamental banana tree (Ensete Maurelii). 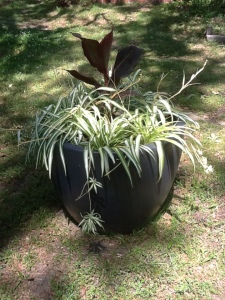 This planter is glazed in a charcoal grey. I planted a variegated spider plant (Chlorophytum comosum) in the hopes that it too, will cascade down the sides and in the middle I planted a Ti plant (Cordyline fruticosa), which produces bright and deep red colors.

Indeed it was a good weekend.