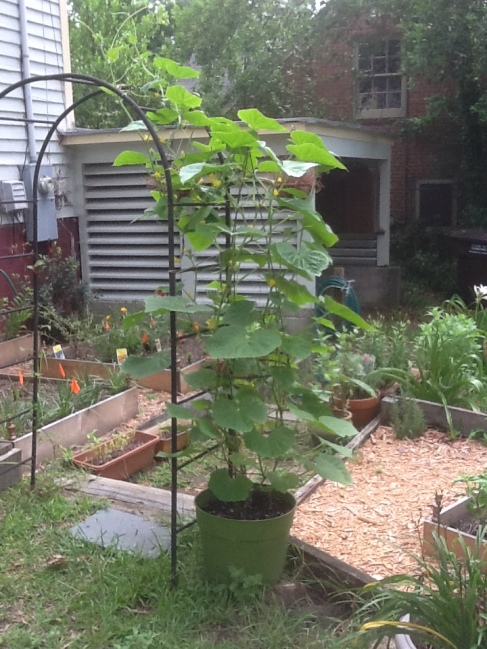 I have to say the plant that is doing the best in the garden are the cucumbers. I refer to them as the “Crazy Cucumber Plant” because they have been growing crazy since I transplanted them out of the herb bed and into a container all their own. They have out grown the trellis I had put in the pot that I had to move them closer to the rickety old metal trellis. The cucumbers have now moved on to it and are almost over the top!

The cucumbers that have been growing are all oddly shaped and rather thin. Perhaps it’s because of the extreme heat we had going a week ago and perhaps I am not watering them enough. I give them a good drenching every day so I am not so sure it’s a water issue.

The rest of the garden is doing so so. I had given up on vegetables because of the lack of proper lighting and switched to ornamentals, but they appear to be struggling too. I think it’s more to do with the extreme heat we recently had. The herb garden is getting along fine and the Zinnias are doing wonderfully. I had planted some lily bulbs kind of late, but they are growing never the less. They won’t grow to their full potential because of it, but I wanted to get them into the ground. I think next year one of the beds should be quite spectacular. We shall see.

In other news my insurance company is still taking their sweet time on settling my robbery claim. I honestly don’t think I’ll see a dime until August, which really sucks because the robbery was in June. I managed to replace my Mac Mini and am currently borrowing a friends monitor, but I’ll have to wait until I receive the money before replacing the television, external hard drives, etc. I will be dropping my insurance company once the situation is resolved because the level of unprofessional care I have received is unacceptable.