This weekend I was able to finish a small project I have been working on lately… since we were trapped inside due to a winter storm. Ha! We didn’t get much snow, but it was cold so staying indoors was a wise decision.

I have been working to re-purpose an old cabinet I have had for a long time. I bought it when I was at university. Over time it served a purpose for my art supplies, office supplies and books.

When I bought this house I originally thought I would hang it in the butler’s pantry for added storage, but after careful consideration I decided against it because I feel it would over-crowd the space. Instead I have decided to re-purpose it into a china cabinet.

The cabinet has two doors with old wavy glass that adds to its charm. I was told when I purchased the cabinet it was found in a barn. I believe at one time it was hanging on a wall and the left side must have been attached to another cabinet because you can see that this side is rougher than the other side and the left side also lacks any molding or trim. The right side has a large notch cut at the top of the cabinet where it probably was pressed up against something structural such as a door frame. 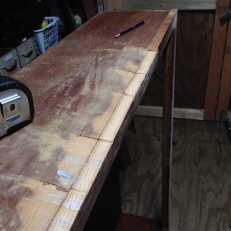 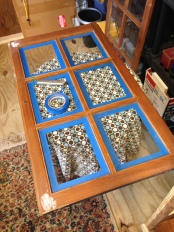 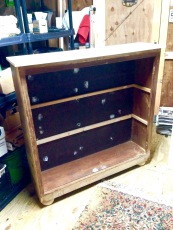 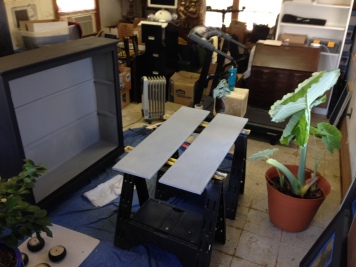 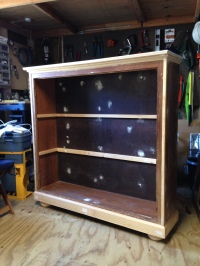 I had to replace the top of the cabinet with a new piece of wood and then replicate the trim using basic molding. My roommate, Melissa managed to do a better job at cutting the pieces than me and so continued to do all the cuts for a proper fit.

Since the cabinet originally hung on the wall I added feet to the bottom to raise it up and give it more presence. The inside shelves are simply made of plywood and originally rested on moveable pegs, but I decide to set the shelves permanently in a fixed location for stability, however I did not fill the peg holes just in case I wish to alter things later.

Due to a lack of electric outlets in the dining room I had to illuminate the interior of the cabinet with twelve battery-powered LED puck lights. There is only one outlet in the entire dining room. Yes, one and it is located on the other side of the room so I could not electrify the cabinet.

Overall I think the cabinet came out fairly well considering how it looked prior to being worked on. Now on to the next project! Transforming an old cabinet bar into a kitchen island…