The cottage paint job is almost done. I have to work around quite a bit of rain and humidity that is common to our area of North Carolina. It’s such an amazing improvement though! The back side is not painted as of yet and some touch-up work needs to be done too, but it looks 100% better already. 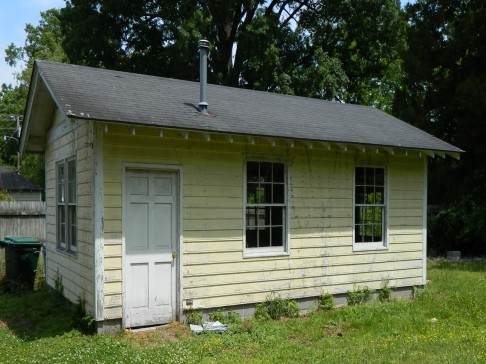 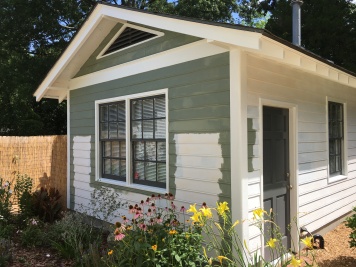 The ornamental garden is getting on nicely, but there seems to be a problem with the kitchen garden. Growing squash type vegetables around here seems to be problematic. I lost a few yellow squash and now the Kombucha cha cha winter squash is dying. I am hoping the cucumber plant will hold out because it is growing cucumbers, but the vine is starting to yellow. Even the tomato plants are starting to yellow and look bad. Sigh.

The pumpkin vine is so far doing well. I do not see any signs of yellowing and I have one pumpkin. One. Just. One. However, I do enjoy the big leaves and the way the vine travels around the bed. I do keep it pruned though so not to get out of hand. I have one Sugar baby watermelon too, but plenty of vines with flowers. I am not sure what is going on, but from my research and asking around everything seems to point to the rain and humidity, which we have a lot of.

The eggplant, bean, corn, ochra, Swiss chard, bell pepper, jalapeno and potatoes all seem to be doing well at this point. The grapes are not doing well. First the birds practically wiped out the crop, which lead me to cover them in netting. However, the grapes are very small. The two clusters at the top of the arbor are still green, but the clusters on the side have turned red and don’t seem to be growing anymore. I don’t know what to do about it.

I am considering doing away with the kitchen garden concept due to these problems. Perhaps I won’t get rid of it completely based on what is still growing, but I believe I will give up on growing vegetables in the squash family. If I follow through on this idea it will open up more room for decorative planting and this is an attractive idea.

2 thoughts on “Ghastly No More!”