The cold has finally settled in. The past couple nights has seen the fountain freeze, but still allowing enough water to flow. The few remaining plants are about to faint, like me. I am standing in the middle of brown wilted plants. Hints of their former glory only a glimpse. I am sullen. The woe! This is how I get during these months and it’s terrible! Anyhow, enough of that.

I finally worked on the corralling or caging of the banana trees. It was rather easy to accomplish, but I did fill up two bins with dead chopped up banana trees! I hope this will be successful in keeping the pseudostems intact during the winter. It would be lovely to have taller banana trees next season.

The trees were easy to cut and dispose of. I used 6 foot garden stakes and rubber like plastic garden fence to create the cage. I then used quite a lot of pine straw to insulate the remainder stalks. I made sure to pack in the pine straw using a hoe.

In the spring when I take down the cage I will gather up the pine straw and reuse it as ground cover under the magnolia trees a long the back of the property. 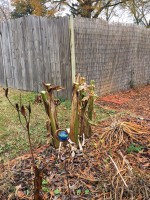 When I purchased this house over 3 years ago I had to have the old refrigerator moved from the rental house and put in the kitchen of the new house. It has always bothered my sense of aesthetics that it didn’t match the rest of the appliances. Originally there was a new stainless steel refrigerator in the house, but the previous owner who I knew asked me once if I thought it would be wrong of him to take the refrigerator. At that moment, not realizing that I would be the one to buy the house, said it would be okay because many people often purchase a new one when buying a home. Ha, I have been kicking myself over that all this time! 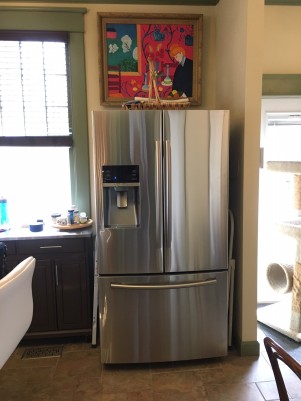 Fortunately I was finally able to take advantage of a good sale I came across and have upgraded to a new stainless steel model that matches the rest of the appliances in the kitchen. It has a great layout inside that provides plenty of space for all in this household and a great feature is the dual ice makers which is wonderful for cocktails.

The old refrigerator, which is nearing 23 years old now and still running fine has been moved out of the house and into the cottage to replace the small leaky refrigerator left behind by the previous owner. I would say we are all prepared for the holiday foods!

A picture of my sweet child napping today… just because.

One thought on “Near Winter”