My, my, my… time flies when you are going mad! As you can see from the photograph above the space is, for the most part, finished. However, there is plenty of boxes about that need going through, sorting and tossing out. I did manage to shred 5, that’s FIVE boxes of paperwork. What a mess, but it is done!

With the chore of finding a place for everything I also need to finish scraping the windows of paint. Unfortunately something is wrong with the new gas heater I installed. It worked fine for two months, but recently I was vacuuming and I tapped the gas line with the vacuum. Shortly thereafter a very strong odor began emitting out from the heater. It’s not a gas odor, but more like something burning / chemical like? I really cannot describe it, but it does irritate the eyes and nose so I have had to turn it off.

In reading up on the unit it turns out it’s not meant to be used as a main source of heat. It is supposed be a supplemental heater. I purchased this through Amazon and it did not state this and it was only when I got the manual out and discover this that now I know. However, with this being said… oh, well. This is small one room space separate from the main house so it does not have another heating source that is efficient. There are two electric heaters, but they are not efficient.

For two months the gas heater ran fine, but it does create a rather humid atmosphere in the cottage and the condensation on the windows is downright awful. I am talking large puddles of water on the sills! So it looks like I require a dehumidifier if I continue to run the heater. In further reading of the manual it does talk about excessive condensation on windows which is natural especially on single pane windows, but also due to lack of ventilation. I never realised the cottage was so air tight! I believe I will need to cut one or two holes in the ceiling and place passive vents to help with ventilation?

I have a problem with this idea because heat rises and so it will escape up into the attic crawl space. How will this be efficient? I really do not know another solution though. As far as the odor goes I think I will need to call the gas company and have them take a look at it. Sigh.

Okay, on to something more satisfying… BOOKS! Finally after 2 years I was able to free my books from their cardboard prison! I needed to construct shelving because I lost one of my shelves to the kitchen awhile back and I also need shelves that would fit in the new space. I wish I could have cast a spell or something to get them because it took damn near forever!

Alas, I could not. So… as Lord Labeouf commands… 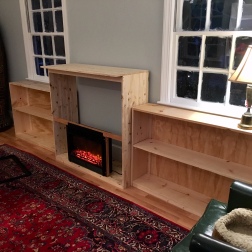 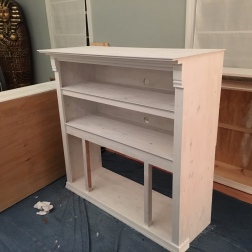 I originally wanted to install a gas fireplace, but it would have taken up too much space so I went with a kitschy electric fireplace which also serves as a supplemental heater. The central cabinet was designed to hold the fireplace and have some display space on either side for artwork or even tall books. I created a shelves for sound bar, subwoofer, Apple TV, Xbox and storage baskets. The upper half was designed to resemble a mantle and holds a television.

The side shelves are for books and storage containers and then with the original shelves across on the other wall I now have plenty of storage for my book collection and other items.

Until next time (hopefully not too long)…